When people think of soulmates they often think of that one person who compliments their soul. But for me, I’ve never believed in soulmates until I visited Rome and wondered to myself if it could be a city. I’ve never been so elated and peaceful and inquisitive and excited for life as I was when I was there.

“I knew right away that you were it for me, there were no reservations or second thoughts, I saw you and in an instant knew in my bones, my soul had known your {city} lifetimes ago.” Beau Taplin

Of my entire three week Eurotrip I had been looking forward to visiting Rome the most. I worried a tad that I might have over-romanticized the city in my head but that worry was muted the moment I saw Italian lands from my small plane window. It was even more incredible than I could have dreamed it to be.

Once I stepped off the plane at Leonardo da Vinci–Fiumicino Airport (FCO) there were countless shops serving Italian coffee, gelato, and pizza. Even the Terravision bus ride to the Termini Station was better than I imagined; hills and farms and beautiful Mediterranean homes everywhere. And then there was the city itself. Every street corner heading to my AirBnB I found myself surrounded by coffee shops, gelaterias, pizzerias, wine bars, more gelato, more pizza, more coffee.

And to top it off, as I was walking into my AirBnB, there was an old lady yelling in Italian as she hung out of her windows shaking off a blanket. I don’t know why, but for some reason that really made me feel like I was in Italy.

My original plan was to rent a Vespa the first day while I waited for my mom to join me that evening. But even after paying for the rental ahead of time and reading all the fine print (or so I thought) there was a $1,000 deposit that had to be paid on a credit card. Since I didn’t have $1,000 or a credit card – no Vespa for me. But it worked out because it left me with both hands free to carry all the gelato and pizza as I meandered ancient Roman streets…. and I had four gelatos and pizza from five different pizzerias that day (I loved Caffè Degustiamo‘s gelato and pizza).

After stopping at the Vespa shop, two gelaterias, and a pizzeria I finally made it to il Fontana di Trevi. It. Was. Amazing. Pictures can’t do it justice. Words can’t do it justice. I went three times in three days and I still couldn’t get enough of it. The water was crystal clear and the fountain was kept in such pristine condition it’s hard to believe it was built in the 1700s.

I have one recommendation for visiting the Trevi Fountain.

Actually visit and take it all in. I lost count of how many people I saw look at the fountain through the lens of a camera snapping photos to look back on years from now, but never moving their eyes to truly feast upon the sight in front of them or appreciate the moments they were living right then and there.

Don’t get me wrong, I took pictures too, but the routine was so common after just a few minutes I was able to call every move a tourist was going to make before he/she made it.

Once I got my fill of baroque, aquatic beauty I made my way to The Pantheon, stopping for gelato a third time along the way. And once again, I was mesmerized. 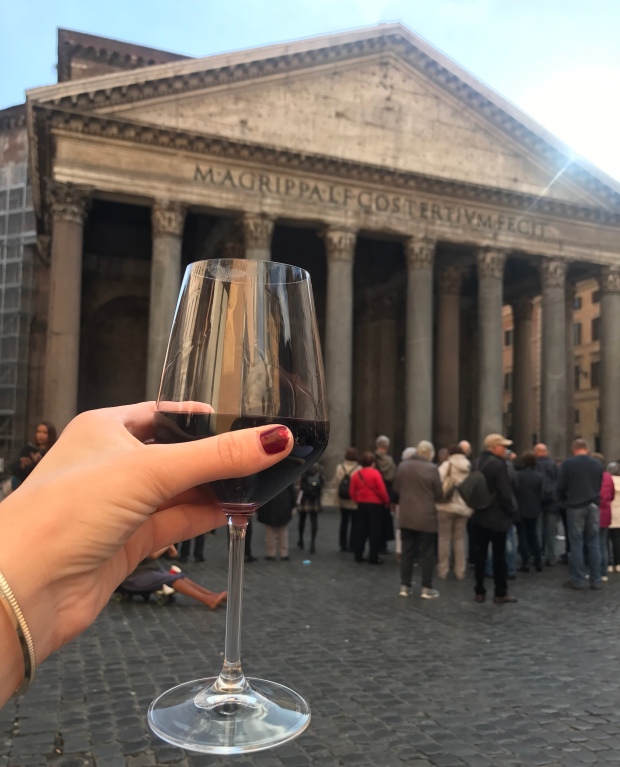 The detail. The beauty. This history. The fact that it is one of the most perfectly preserved structures from Ancient Roman times. The Pantheon is not just a site to be seen – it’s a sight to be admired and studied and drooled over. 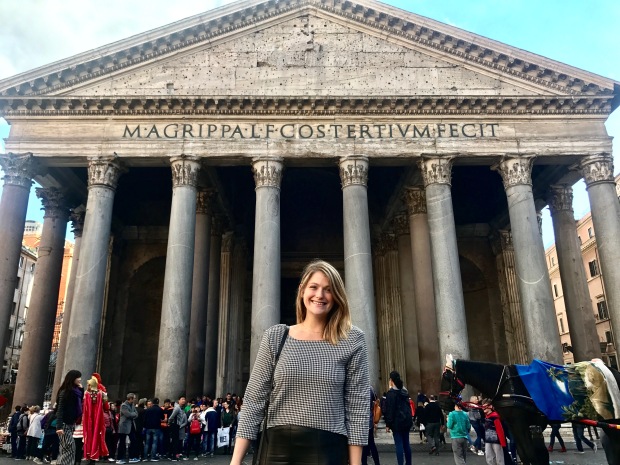 After admiring the inside of the The Pantheon and praying at the altar, I came back outside and ended up people watching and treating myself to fancy Italian wine for a couple of hours while I waited for my mom to get in from Amsterdam. Her flight came in pretty late so when she finally got to Rome we headed straight to dinner at Ristorante Zeus where we had more wine, spaghetti, and more gelato. 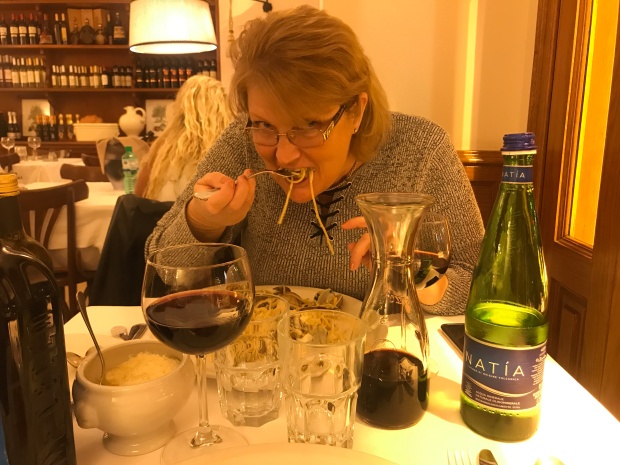 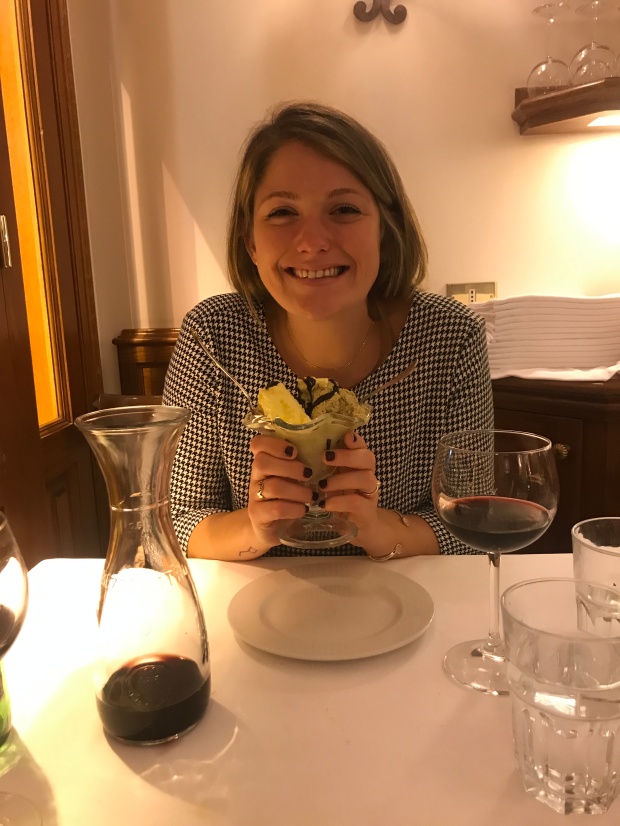 After dinner, mom had about an hour’s worth of energy left before she needed to hit the hay so I took her to the Trevi Fountain. And I think she loved it almost as much as I did!

One piece of advice though. There was a man insisting on giving “beautiful women” roses and offering to take their picture for free. But once he gives you the rose and takes your picture it’s no longer free. He hassles you until you pay him for both the rose and picture you didn’t ask for. We got a nice picture and some pretty roses, so we gave him a couple euros but don’t accept his “free” offer if you don’t have any change on you! 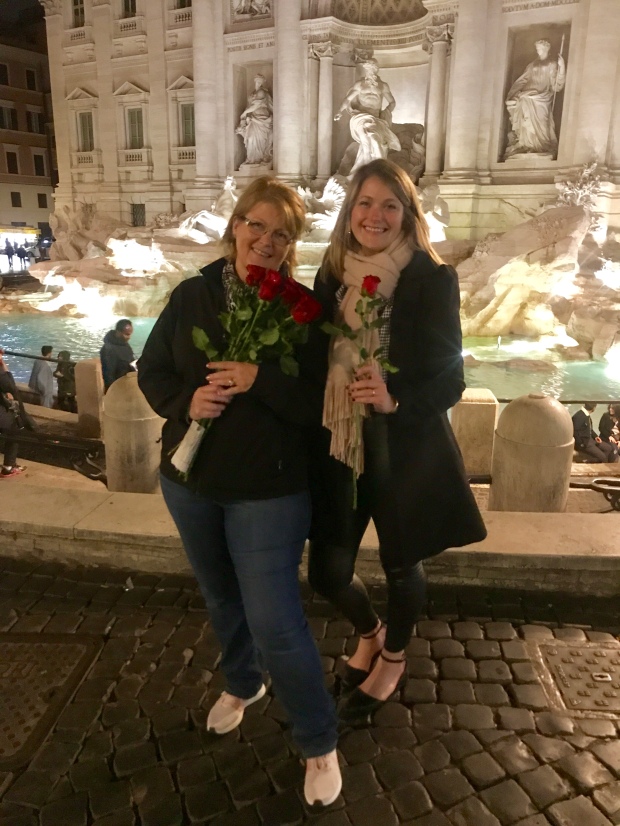 After seeing the Trevi and getting our roses we finally headed back to our AirBnB to sleep and dream about gelato and pizza and columns and wine and meatballs before our second day in Italy.

Like most millennials, I’m a typical 9 to 5 office worker always dreaming about my next adventure. But unlike most, I love my job too much to actually leave it. So I like to think of myself as a 5 to 9 nomad; backpacking, traveling, and exploring as much as I can once I’m off the clock. And this blog is my way to document my adventures.